About me: From Runner to Racewalker 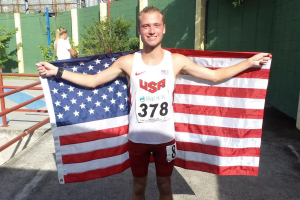 Hey everyone, it came to my attention that I probably should have started with an introduction rather than just jumping straight into things. Anyways, my name is Anthony Peters, a racewalker who is trying his best to make it to the Olympics (fingers crossed). I have been a runner/racewalker for about 12 years. I started my running career like most overcompetitive children, I wanted to be faster than my friend/rival. Ironically, like those Pokémon games, I played as a kid, because why not? Anyways, I digress. I was on a soccer team at the time and we would run a mile every day around this pond. I would always end up last while my friend/rival would always beat everyone. I was getting kind of sick of it and started thinking up ways to get faster besides the obvious, just go for runs even outside of practice times. That is about when I heard of the running club during my middle school announcements. I figured, “this is great, I can train there and get faster than my friend!” so I signed up, told my parents, and showed up the first day excited and ready to go. But who did I see there? No other than my friend/rival/apparent leader of the whole club. To say I was shocked was kind of an understatement, but my competitiveness got to me and I ran my heart out every day to run as close to him as possible for every practice that I could.

Progressively, it just got easier and easier to run with the top group. Even on days when the club was not meeting, I would just run to run. I came to just really love running. I would just daydream the long miles away. However, with no indoor facility for the running club, we could not really continue during the Winter. I felt lost. I could not drive at the time to a gym and running during a Midwest Winter is dicey at best. So, with my Dad’s help, we looked for a year-round team to train with. That is how I found the Elgin Sharks. That is also how I found out I had a long way to go. Never in my life had seen so many fast kids in one place! Unfortunately, I got overzealous, over-competitive, whatever you want to call it, and I ended up getting injured. I was pushing too hard, too fast. It was kind of sad, I felt like a little kid stuck in the corner just watching everybody else play and have fun. Luckily for me, my Dad came up with the idea for me to take up Racewalking. The club had it, my twin brother was already doing it, and he said if it hurt my injury I could stop. So, I thought to myself, “well, Alex (my twin) likes it, I want to be able to train again, maybe I can just do it until I am no longer hurt?” Famous last words. My Dad introduced me to Coach Diane, one of the sweetest, smartest, and by far the feistiest woman I have ever met. With her and my Dad Coaching, I just began to love racewalking. It just turned into me running and racewalking all the time. I loved it and it did not aggravate the injury! With no other than my twin as my rival, we pushed each other every day to new heights.

Rather it be at home or on the track, we had each other to keep improving. From national championships to international championships as members of Team USA my brother and I just kept pushing each other. Eventually, we went our separate ways for college. As twins we were treated as the same person for so long, so we decided college would be the time to do our own things. Alex, unfortunately, had a season-ending injury that was too much to run or racewalk through. This eventually led him to end his athletic career and just focus on school. Now he is a racewalk judge, still giving back to the sport. Before COVID-19, he participated in his first racewalk race in years. We were all so excited for him. So even if he does not get back to where he was, it is just fantastic to see him loving the sport again.

Anyways, throughout my college career, I participated in the NAIA. The only college division that has the Racewalk. During my college career, I worked with a really amazing group of coaches. For racewalking, I mainly worked with Coach Jansen. Another seasoned, female coach who is truly passionate about helping her athletes grow. From there I won 6 national championships (indoor and outdoor), with a total of 8 All-American finishes. On top of this, I also competed at international competitions for Team USA and at the 2016 Olympic Trials. Despite this hectic schedule I also held multiple jobs for all 4 years of undergrad while working towards 2 majors and 2 minors. This led to some stressful scenarios as one could imagine. If you have not checked out my first blog post I go into a bit more depth, there. Anyway, I still graduated and even got into graduate school. For me, this was a huge deal. As someone who truly did not do as well in school as he should have when he was younger, this was something I never would have imagined happening. If I could go back and tell little me I know he would not believe this.

Anyways, I digress. I ended up with majors in Exercise Science and Human Performance and Fitness, as well as a minor in Biology and an interdisciplinary minor in Future Health care Professionalism. Finally, I also now have a Master’s in Exercise Physiology. After a very rigorous course load, including a Thesis and study of my own design (fingers crossed we will be officially publishing the study sometime soon). I did it, I graduated, I got through it. Little me would be so proud. Currently, I have two jobs as COVID-19 sidelined a bunch of my plans like it did for most everyone. I have a new Coach, Olympian, and world record holder Tom Bosworth, cool dude. I am also an Assistant Coach at my alma mater St. Ambrose University while simultaneously trying to train for this year’s Olympic Trials. Despite all this, I stay sane thanks to my boyfriend Paul (he is a saint). So that is my story, from runner to racewalker. I hope you all enjoyed it if you have any questions feel free to comment!